Ghost Kitchen Orlando provides crafted, fresh, and wholesome meals to the Central Florida area. All of our meals are scratch-made with an emphasis on high-quality, all-natural ingredients

Ghost Kitchen Orlando launched in 2020 with the commitment to provide Central Florida with the convenience of delivered/to-go meals, with the same quality you would get at a restaurant. Whether you need fresh and healthy lunch options, time-saving prepared meals, or office-brightening catering, Ghost Kitchen Orlando is your one-stop shop.

Being a “Ghost Kitchen”, we have no physical storefront, hostesses, servers, or bartenders like a normal restaurant would. Because of this, we can focus solely on the quality and freshness of the food, which is what we’ve always valued most. “Crafted. Fresh. Wholesome.” Is more than just our motto—it’s a promise.

Sometimes having too many cooks in the kitchen can be a good thing. 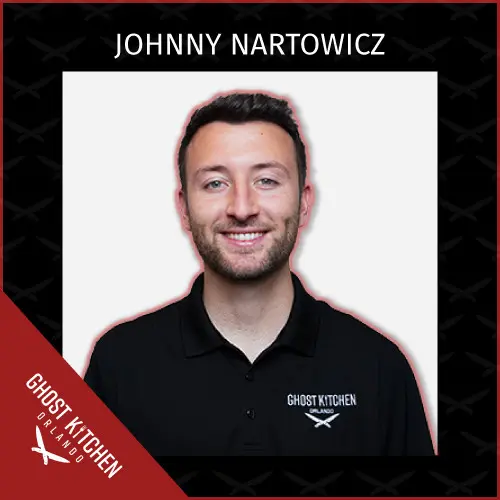 Johnny Nartowicz, the owner and co-founder of Ghost Kitchen Orlando, attended Rollins College where he earned his bachelor’s degree in International Business. He then went on to pursue his master’s degree in business administration at Rollins College Crummer Graduate School of Business. There, Johnny concentrated in management and was inducted into the International Business Honor Society, Beta Gamma Sigma, for graduating as one of the top students in his cohort at business school. During his time at Rollins College, Johnny was an NCAA varsity collegiate student-athlete, being the team captain of the Rollins College men’s soccer team and helping lead the team to a conference championship title, multiple conference tournament final appearances, and an NCAA tournament appearance.

Growing up with a professional chef as a parent, Johnny grew a love for cooking and wanted to pursue a career centered around food in the restaurant industry. He began his professional career working for his family’s international culinary consulting firm, providing strategic insight to various companies throughout the foodservice sector. Working for NICCLLC, Johnny ideated Ghost Kitchen Orlando to adapt to the shifting restaurant industry and consumer trends. In his free time, Johnny enjoys spending time with his family and friends, golfing, playing soccer, and going to the beach. 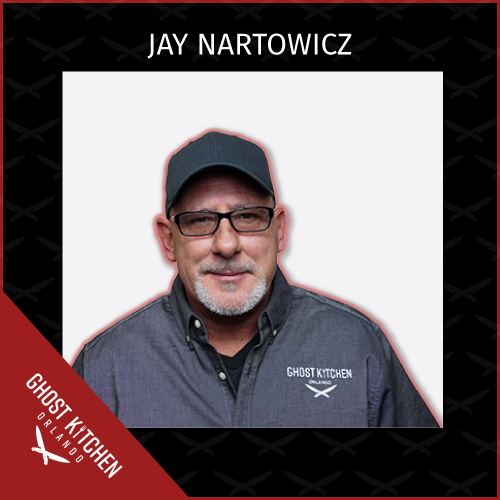 Jay Nartowicz, co-founder of GKO, has experienced an extraordinary career in the restaurant industry as a professional chef. Jay is a graduate of Johnson & Wales University in Providence, Rhode Island. His culinary career has included senior management positions for some of the largest branded chains and restaurants in the United States and United Kingdom. He is a founding Board Member of the Research Chefs Association and has lectured at the University of Houston and University of Illinois. Jay has been recognized and awarded throughout his career for leadership, innovation, speed to market, and team building. Jay was The Director of Food Innovation and Development for Whitbread, plc, in the United Kingdom. As Department Head, his team included culinary, business development, equipment process, and commercial finance for over 43 brands that totaled over 4,200 units.

Before Whitbread, Jay had a similar position in the United Kingdom for Allied Domecq, plc, which originated in the United States with their retail brand. In the United States, Jay has held Senior Culinary Management positions with Walt Disney World, Back Bay Restaurants, Boston Market, TOGO’s, Darden Restaurants, and Griffith Laboratories.
In 2002, Jay started his own company, Nartowicz International Culinary Consulting, LLC. With Jay’s unique experience, skills, and talents, his consulting business has paved the way for growth for multiple restaurants, new concepts, retailers, foodservice suppliers, and manufacturers. Jay has successfully grown his culinary consulting company to be able to assist in launching some of the most popular and recognized menu items for foodservice brands around the globe. Jay lives in Orlando and loves spending time with his family. He is most proud of the personal and professional successes of all his children. Jay loves to prepare family dinners, travel, golf, dine out, and go to the beach with family and friends 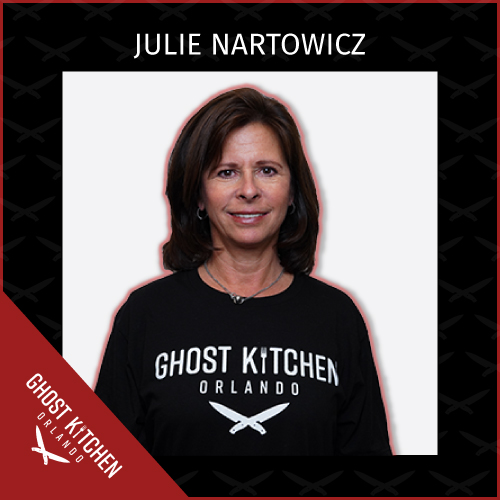 Julie Nartowicz, managing member of Ghost Kitchen, also serves as the Vice President of NICCLLC. Julie has a keen ability to see foodservice products and strategies through the eyes of the consumer. Her responsibilities include marketing, communications, presentation strategies, and procurement. She also assists with new concepts and crafting recipes, while being exceptionally skilled at dessert and bakery product development. In her role at NICCLLC, Julie has helped to launch numerous products, restaurants, and brands.

Julie’s prior restaurant operational experience includes managing some of the first Boston Chicken sites in Massachusetts and Connecticut. She was also a key member of the opening team for Joe’s American Bar & Grill, which is a part of the Back Bay Restaurant Group. Julie is a graduate of Keene State College in New Hampshire, with a Bachelor of Science degree.

Julie enjoys spending time and being active with her husband and children. She also likes running, family dinners, traveling, going to restaurants, attending concerts, and relaxing at the beach. 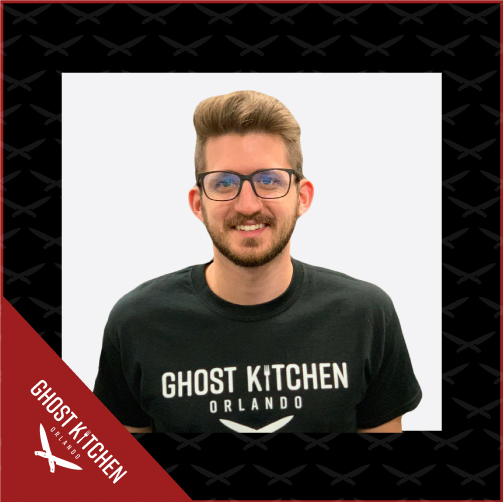 Colton O’Dwyer is the Chief Marketing Officer of Ghost Kitchen Orlando. He is responsible for all aspects of Ghost Kitchen Orlando’s marketing efforts including brand awareness, social media outreach, paid advertising and more. Colton attended University of Central Florida where he earned his Bachelor of Science degree. He then went on to Rollins College Crummer Graduate School of Business where he earned his Master of Business Administration with a concentration in Entrepreneurship. Colton began his professional career working at several marketing agencies in the downtown Orlando area and as a marketing consultant for multiple non-profit organizations. Colton also doubled as a freelance digital marketer specializing in website design, paid advertising, and social media marketing where he helped countless companies strengthen their digital presence.

While obtaining his MBA, Colton met Ghost Kitchen Orlando co-founder Johnny Nartowicz. When Johnny introduced Colton to the concept of a Ghost Kitchen and the shifting consumer trends in the restaurant industry, Colton knew he would be a great fit and be able to bring his marketing prowess to the table. In his free time, Colton is probably trading cryptocurrency, playing piano, working out, or making mediocre techno music. 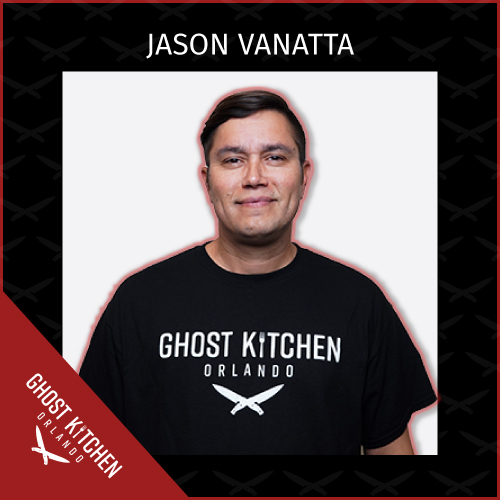 Jason graduated from the Florida Culinary Institute in West Palm Beach, Florida. After graduation, he worked as a Sous Chef for fine dining restaurants throughout South and Central Florida. Jason has lived in Central America, where he owned and operated 2 beachfront restaurants and a Personal Chef and Catering Company.

His projects are varied, ranging from new concept development, restaurant openings and trainings, event planning for large conventions, and product development for food manufacturers. He is exceptionally skilled at “out of the box” thinking and creativity. Jason has helped launch numerous products, restaurants, and brands. He also continues to operate his own culinary business, working for events and festivals by elevating their food offerings to a new level. His creative and artistic abilities helped launch Imperial, which is an import furniture store by day into one of the top restaurants and bars in Orlando by night. Jason lives in Satellite Beach, Florida with his wife, Stacy, and 2 daughters. Jason enjoys spending time with his family, surfing, traveling, and attending concerts.

Read More
Be the first to know about new weekly specials, coupon codes, deals and more!